Relational organizing, or specifically Relational Voter Turnout (or “RVT”) is not new. Rather, it has been a tried-and-true technique for as long as people have been organizing in communities. Some would even go so far as to say that the phrase itself is redundant. After all, all organizing is, at its core, based on relationships, right?

Over the past few years, the progressive movement has seen a bunch of new tech tools burst onto the scene offering new workflows to facilitate relational organizing. Generally, these tools work as follows:

When implemented fully in a campaign, these tools can have a major impact and studies have shown great benefits from strong relational organizing programs. That said, full implementation and integrations of these tools and techniques can be a major challenge. Don’t take our word for it – check out this 2019 report from DigiDems about the challenges they encountered when their 80 technologists were embedded on campaigns all around the country in the 2018 midterms trying to implement RVT tools.

Reach, while originally conceived and designed as a canvassing app, has also become a go-to RVT solution for many campaigns and we think about Relational Organizing a bit differently than the flow described above. To go point by point:

The core elements of RVT in Reach

The RVT process, like everything else in Reach, starts with search. Our search is fast and effective at finding the person you’re looking for in the voter file. It even handles common nicknames and name variations so if you search for your friend Jake, you’ll find him even if he registered to voter as “Jacob”. Some folks sit on their couch and lookup all their friends in Reach while they watch Netflix. Some campaigns even throw “Reach and Rosé” parties where they all get together and drink wine and look up their friends in the voter file.

Reach doesn’t just depend on pre-existing relationships, but it helps a folks build new relationships between volunteers and voters who may have just met in the context of the campaign. The relationship should not end when the first canvassing interaction is over – it should just be beginning. The History tab on the My Reach screen lets each user see a running list of everyone they have previously Reached. They can then go back through the folks they’ve met and send follow-ups to keep the conversation alive. Some campaigns will prompt their Reach users to send specific follow-ups throughout the cycle or add new survey questions at various milestones and ask their users to gather new responses from people they have previously Reached.

When a campaign ready to go deeper and get more specific than the full history view, they turn to the Network tab on the My Reach screen. Here, each user can curate a list of everyone in their own Network. When I’ve added someone to my Network, I am taking ownership of that relationship and it’s my job to get everyone on that list to show up and vote. Organizers have been doing this with clipboards for generations, but Reach enables that same sort of classic distributed organizing and delegation of responsibility, but tied to the voter file and with lots of yummy data for the campaign!

Relationships Types are customizable by the organization using the Network admin screen so you can let user be as specific as you want as they map their relationships. Sometimes, even if the type of relationship isn’t critical to your program, having a list of types that users can choose from can help make them think with an open mind about all the different types of people in their life that they could add to Reach. All relationship data is available export as well, if a campaign wants to make their own dashboard or schedule follow-up reminders with users to contact the folks in their network.

While Reach doesn’t attempt to own the conversations that volunteers are having with their friends and family via all sorts of communication channels, it does give volunteers a simple way to initiate a conversation over the most common channels, use a script written by the campaign, and even let the organization know when conversations are happening via other methods. In Reach, we call this “contact actions“.

There are currently four available contact actions that a user can take in Reach: SMS, Email, Phone Call, and External Contact. Any time a user executes a contact action, Reach stores that information and makes it available to the campaign via the Contact Actions export type. Contact Actions (along with saving new survey question responses) also resets the clock on when a user last Reached a person, which is then made visible to that user on the person’s profile.

SMS, Phone Call, and Email Contact Actions can be triggered by any user who can see a person’s phone number or email address. This means either the user has added that contact information themselves, their permissions are “Verified User” or higher, or contact info privacy masking is disabled on a campaign. In this case, the user can simply tap the Message, Call, or Email button at the top of the person’s profile screen under their name. Reach will redirect that user to their own Texting, Calling, or Emailing app on their phone with the person’s contact info pre-filled.

For text-based contact actions like Email and Message, you can even set up Contact Scripts which let your users pick from a list of prewritten scripts so there’s always something to say that aligned with the organization’s messaging and goals. These scripts will also be pre-filled in the user’s own app when they choose one.

The contact attempt will come directly from the user’s own phone number or email address, just as they’d communicate with their contacts in every other non-canvassing conversation. The contact will have no indication that this conversation originated in Reach.

For conversations that happen in any other channels besides SMS, Phone, or Email, a user can tap the menu button at the top of a person’s profile and select “Mark as Contacted”.

Reach is a progressive technology start-up building tools for political campaigns, labor unions, non-profits, and activists around the united states. Read more about us here.

Reaching in a Time of Social Distancing 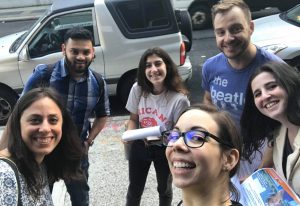 Get email updates from Reach